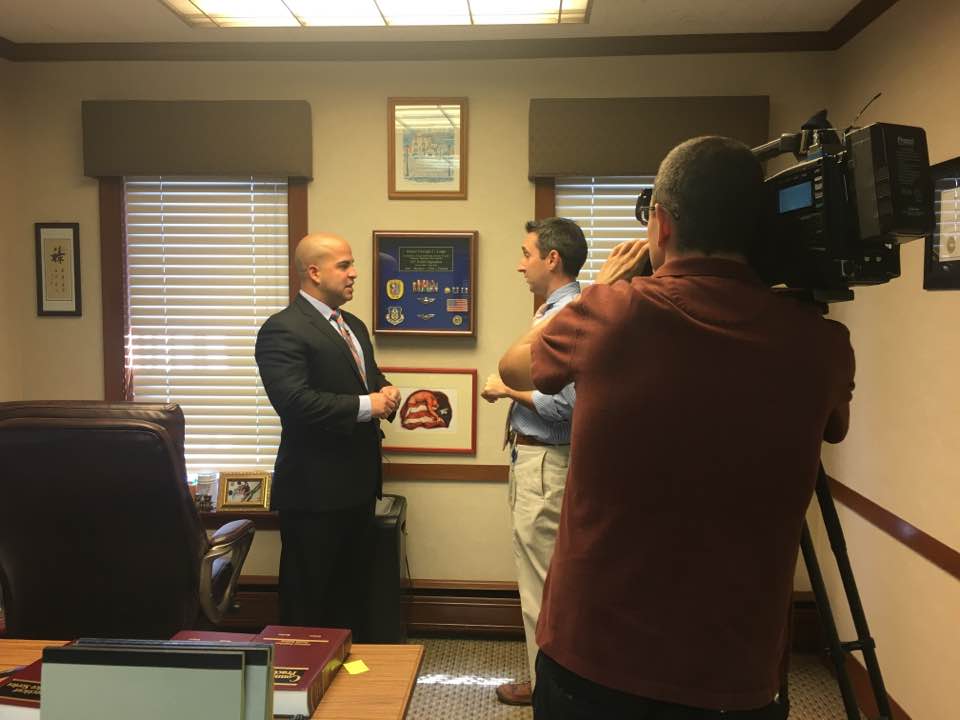 NEW HAVEN >> Charges of first-degree sexual assault and two counts of risk of injury to a child were dismissed Thursday and defendant Alex Feliciano left the courtroom smiling after the emotional teenage complainant refused to continue her testimony.

The sudden and surprising collapse of the state’s case occurred within the first hour of the trial. Superior Court Judge Jon M. Alander thanked the eight jurors for being willing to serve and sent them home.

The jurors had heard the prosecution’s allegations as read by the court clerk: that in New Haven on “diverse dates” in 2011 and 2012, Feliciano allegedly compelled the girl to have sexual intercourse in the van he used for his cleaning company job; that in the same van he “had contact with intimate parts of a person under 16”; and that in the same vehicle he had put the girl “in a situation likely to impair her morals.”

When Senior Assistant State’s Attorney Seth Garbarsky called the teen to the stand as his first witness, she did not immediately enter the courtroom. When she did come in a minute or two later, she was crying and clutching a handkerchief.

After softly answering a few preliminary questions, the girl acknowledged she knew Feliciano, who is a relative of hers. She identified him in the courtroom.

She then testified he had worked for the cleaning company and drove one of its vans.

“Early on, were you friendly with him?” Garbarsky asked. She replied, “Yeah.”

On several occasions, she said, Feliciano texted her on her phone and invited her to go with him in the van so he could buy her candy. Asked how often he took her out to do this, she said, “Too many times.”

When Garbarsky asked if “something bad” happened during one of those trips, she said, “Yeah.”

Garbarsky then asked her, “Can you tell the jury what happened to you?” She was unable to answer and her sniffling intensified.

As Garbarsky tried to elicit any information, she asked, “Can I have a break now?” Alander told her it might be best if she got done with her testimony. But as she still seemed hesitant and upset, he called for a 10-minute break.

However, after a further delay and after Alander met in his office with Garbarsky and defense attorney Angel Lugo, court re-convened without the jury present. Garbarsky then stated, “She is refusing to re-enter the courtroom. During the recess, she had a change of heart (about testifying). She is overly emotional. I am not going to force a witness, a minor, to come back in.”

Garbarsky requested the charges be nolled. Under such an arrangement, unless the state decides to revive its prosecution within 13 months, all charges are automatically dismissed.

But Lugo asked that the three charges be dismissed immediately. Alander agreed to do so, as re-trying Feliciano would constitute double jeopardy.

Feliciano smiled, thanked Alander, shook hands with Lugo and departed. Alander went into the jury room to tell them what had happened and to thank them for making their commitment.

After court adjourned, Lugo said, “I’m very relieved for Mr. Feliciano. Hopefully, he can find closure now and resume his life. I want to thank Mr. Garbarsky for his professionalism and having the moral courage to do the right thing.”

Garbarsky said, “I’m disappointed. But I understand the victim’s attitude in not wanting to go through it again.”

The allegations surfaced when the complainant spoke to her school principal and then a school social worker. She was then interviewed by staffers with the state Department of Children and Families and the Yale Sexual Abuse Clinic.

During pretrial arguments Thursday, Alander said he would allow Lugo to cross-examine the girl about telling investigators a second person had sexually abused her. Lugo said this would help him try to prove the girl was “confused” about who had abused her. He also said she might be lying or has post-traumatic stress disorder.

“She could in her mind believe my client did it,” Lugo said. “But she’s mistaken.”

According to the arrest warrant, Feliciano agreed to speak with police about the allegations. He was quoted in the warrant saying initially that he could not remember if he had ever been alone with the girl. But then he said he did remember being alone with her in the van and taking her to get candy.

The warrant stated that when police continued to ask what had happened when he was alone with the girl, he “became very distraught” and jumped out of his chair, saying, ”I swear on my mother nothing happened!”